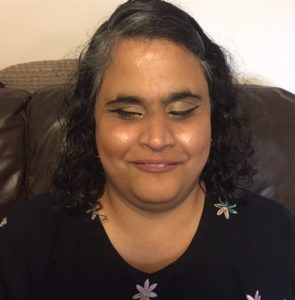 Kaukub Asia is a Social Worker working with young offenders in West Yorkshire at Kirklees Council.

When she was training to be a Social Worker, she was told repeatedly by her peers she wouldn’t be able to succeed because of her vision impairment. People would tell her “it’s too dangerous, how would you know if a young person is carrying a weapon.”

Born with the eye condition Retinopathy of prematurity (ROP), Kaukub has now been working as a Social Worker for the past five years. She said: “Anything is possible, it is about having a positive mindset.”

She adds “It is the best environment for me – I love my role and wake up every day with a passion in my belly for the job.  I know many don’t have this feeling sadly. This is through having a supportive team and line manager who enable me to thrive in the role.”

Due to the nature of the role there are sometimes tense situations, but she explained: “I have been trained to de-escalate these situations. If a young person starts to shout, I know it’s about giving them the space. It’s having confidence and being able to reassure that young person.”

She added: “There are procedures in place to maintain the safety of all social workers. Young people are often asked to turn out their pockets so at that point we would know if they were carrying any weapons.”

Her vision impairment has never been an issue with her young people and their families. She has built excellent relationships and a good rapport with them. She said: ‘If anything, they know I’m completely focused on them and what they are saying. Others might get distracted by what else is going on in the background visually.  I focus completely on the child.”

She credits her family for her self-belief and positive attitude. She said: “My family always told me I could do anything I wanted to.”

Kaukub works in her role part-time handling up to nine cases at any given time. She uses evidence-based assessment to review cases and gain a real understanding of the unique backgrounds and circumstances of the young people she is helping.

The rest of the time she volunteers as a Police Co-ordinator for victims of hate crime, providing emotional support for people who have been prejudiced against because of their race, faith or disability. In her volunteering role, she also put together a Disability Awareness Pack for all officers to use in their roles. This has become an invaluable tool in helping other officers understand vision impairment.

Kaukub speaks three languages. As well as English, she is fluent in Punjabi and Urdu, which means she is able to provide vital interpretation in both her jobs when required.

At work, Kaukub is able to see screen content by using a computer screen reader, JAWS. Both this equipment and funding for a support worker is provided by the Government’s Access to Work* scheme.

Kaukub has worked alongside her support worker Debbie for the past ten years, and credits Debbie with helping her to reach her full potential in the workplace. If it were not for this support Kaukub feel she would not be able to undertake her role. They both work as a seamless team.

Having a supportive team around her and supportive managers, have helped Kaukub thrive. She describes her employer as “supportive, compassionate, inspirational”, and says her managers “have given me time and space to work out how to do the best job I can”.

She explains: “For me it’s about acceptance, being classed as a colleague – being equal. If you haven’t got a supportive team you will struggle.  It’s the little things that really make a difference.

“Colleagues thinking ahead by making sure documents are in an accessible format, sending these in advance of meetings and never declining to offer an arm for a sighted guide, offering to carry hot drinks from office to office, describing personal photos in a natural normal way and just generally being comfortable enough to have a laugh about blindness.”

“It is the little things that make you feel valued and part of the team.”

She added: “I’m happy and in a successful role and want my peers to achieve the same. Remember the only thing that stops you fulfilling your true potential is yourself.”

Kaukub lives with her family In Huddersfield, West Yorkshire, has a passion for animals, and has recently taken up horse riding.

The cost of accessible technology for employees with disabilities does not have to fall on the employer.  The government’s Access to Work grant helps disabled employees pay for special equipment, adaptations, support worker services or help getting to and from work.  www.gov.uk/access-to-work